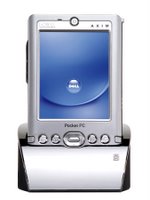 If what has deterred you from buying the Dell Axim X5 is its bulky size, now is the time to take a look again. Dell has expanded its handheld product family with the introduction of the Axim X3 series, which is nearly a third lighter than its predecessor and also 17% thinner. The three new models include the Axim X3i with integrated Wi-Fi 802.11b, and two non-wireless Axim X3 configurations.

Based on Microsoft’s Windows Mobile 2003 for Pocket PC platform, the X3 series comes with the usual line-up of applications, an SDIO-capable expansion slot, and a 3.5-inch transflective TFT screen (240 x 320 pixels). The Axim X3 also includes a consumer range infrared port, although Dell did not specify whether the company bundled any software to take advantage of this capability.

As usual, all three models are competitively priced.

The higher end models are powered by an Intel XScale processor running at 400MHz, and offer 64MB of SDRAM and 64MB of Intel StrataFlash ROM memory. Those with lower memory and speed requirements can opt for the cheapest model, which runs on an Intel XScale 300MHz processor, has half the memory capacity, and comes with a USB sync cable instead of a cradle.