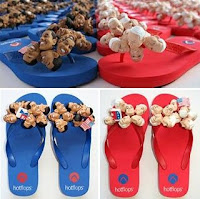 Check this out: Hotflops, a manufacturer of flip-flops, has come up with new designs that feature a grape-like bunch of miniature faces, fashioned in the likeness of US presidential hopefuls, Barack Obama and John McCain, whom as we all know, have flip-flopped on many issues.

The sandals, known as electionflops, are only available for purchase online and by phone and have been produced in limited quantities. Apparently, the Obama flops are selling better than the McCain’s by roughly two to one. Let’s hope this is an indication of actual success at the polls rather than a reflection of what voters think about the candidates’ tendency to go with the flow.