We have the fourth highest military spending per capita in 2008 (US$1,625/person), according to the chart below from The Economist. The chart is based on data from Stockholm International Peace Research Institute, which said that global military expenditure rose by 4% in 2008 to a record US$1.46 trillion. So much for the recession… 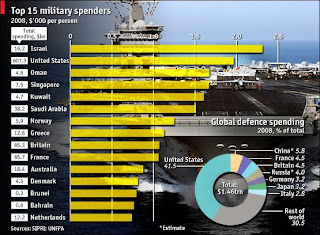 Defense budgets are a mirror to a country’s strategic intentions and its potential to threaten others. By every measure, Singapore’s military spending – approximately one-third of government operating expenditures (or 4.5% of GDP on average) – seems to run counter to its well publicised deterrence policy.

In fact, Singapore has plenty of artillery with a range longer than its island is wide, so one can only assume that it plans on shelling Malaysia sometime.