I was quite hesitant to write an update for the coming election because the last election was supposed to be a watershed event. But nothing was shedded by the #PartyAgainstPeople except for a GRC, and the PM was back to his old ways fixing the opposition soon after.

Pundits are now saying that this will be another watershed election. I hope they are right or else we can expect more fixing to come.

I have my doubts though. Many daft Singaporeans, as far as I observed, are simply not ready to get off their sorry asses and overcome their fears to fight for their rights. Mind you, even though a dead dictator once called Singaporeans daft, I think most are pretty smart as they vote primarily based on a twisted form of “enlightened self-interest”. Otherwise, how can one reconcile the belief in the “fishing village” revisionist history despite evidence pointing to the contrary?

“A man will fight harder for his interests than for his rights.” ~ Napoleon Bonaparte

But I digress. Let’s get back to my two cents on what the opposition could do in the coming general election.

擒賊先擒王
Loosely translated as “capture the ringleader first in order to capture all his followers”. And the biggest ringleader of all is none other than Pinky himself.

Given the resignations/retirements all around (not just in AMK GRC), the #PartyAgainstPeople is facing a manpower crunch (I wouldn’t call them “talent” as they fall far short of it). Suddenly, even the seemingly impregnable AMK GRC looks vulnerable.

I think the opposition should not miss this golden opportunity to effect change. Yes, for the sake of unity, only one opposition party will presumably contest in AMK GRC (we never know until Nomination Day comes along), but that doesn’t mean the other parties cannot render their help to campaign for the opposition cause. In fact, I think they should band together to help the team contesting in AMK GRC to cover more ground. And there are ways to do it – read the second point below.

The biggest prize if the opposition succeeds in capturing AMK GRC is of course the PM himself. In the process, you will also deny the self-proclaimed “son of Punggol” the pleasure of a back-door entry (ahem!).

Son of Punggol attempts backdoor entry to Parliament. What do you call such a person? An asshole.

So what happens if the PM is voted out? (No, the world will not end and the opposition will not squander what you have.)

I’ve tried to research on this topic, but there seems to be nothing in our constitution that deals with this situation. If anyone is able to uncover some relevant information, please post in the comment section below.

I think there will be two possible scenarios if Pinky loses his seat and is unable to serve as PM:

2. The #PartyAgainstPeople asks a loyal MP to stand down and create a by-election for Pinky to contest. This is risky because of the hint of cronyism and the fact that Pinky may not win if he has to stand on his own.

If the #PartyAgainstPeople decides to plug some legal loopholes* to send Pinky back into Parliament, what the opposition parties need to do is to move a motion of no confidence in Parliament.

*One possible loophole: Roy Ngerng, who is expected to contest under the RP banner in AMK GRC, becomes bankrupted by the PM and is disqualified to hold office. I know, there are so many levels of irony here.

Population White Paper
To all opposition parties, there is no need to agonise over whether to campaign on local issues or national issues in #GE2015. Whatever your political differences, the population white paper presents the perfect opportunity for all opposition parties to campaign on a common platform without having to stand under the same political banner, because everyone can agree that this is the single biggest problem facing the nation since LKY.

The beauty of campaigning on the population white paper is that it encompasses issues both local and national due to its wide-ranging implications, such as social integration, infrastructure development, quality of living, cost of living, employment, CPF, housing, healthcare, education, etc. You can basically talk about everything that matters and relate it back to the population white paper.

These issues will resonate with people who care only about their enlightened self-interest, as well as those who can see the bigger picture ahead. No need to flog the democracy horse that few want to understand.

By collectively campaigning on the population white paper, the opposition can present a united front and cover the issues more comprehensively from different perspective, leaving no room for the #PartyAgainstPeople to defend the indefensible. How good is that?

Of all the opposition parties, I suspect the WP would be most disinclined to help out, which would be a shame since it has the most resources to do so. I hope I am wrong on this count.

MPs are lawmakers, not estate managers
Grasping at straws, the #PartyAgainstPeople is trying to turn a nationwide general election into a municipal contest, continually harping on AHPETC in a lame attempt to discredit the WP.

But as Dr Paul Tambyah from SDP rightly pointed out:

“MPs are more than estate manager, someone who can lead the country, not clear the drain.”

In one of my previous posts, I highlighted that the role of MPs is not to explain the government’s policies to the people or to ensure that your neighbourhood precinct is the first to be upgraded. MPs, whether they are from the ruling party or opposition parties, are lawmakers, not estate managers. 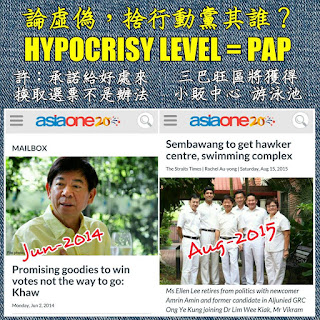 That’s why it is important to maintain the proverbial separation of the church and the state. Making this distinction may not yield immediate results for the opposition in this election, but if the electorate is not educated about the issue, voters will continue to vote based on how many carrots are at stake.

However, upgrading is now old news. And unsustainable in the long run. If you keep dangling carrots at the electorate every election, there will come a point when you run out of bribes, I mean, incentives for mercernaries to vote in your favour, and the “social contract” will be broken. Worse is if the #PartyAgainstPeople is forced to dig deeper into the cookie jar to fund a bigger incentive scheme.

Let democracy run its course
There has been a lot of talk about opposition unity since the election fever began. In the light of NSP’s flip-flops, I’d say forget about the alliance. Let the best party represent the opposition cause in key battlegrounds, even if it means having a multi-cornered fight. Certainly, you don’t want clowns like Khaw Boon Wan to be re-elected because the SDP gave way to a party that has lost its moral authority to compete.

And if the opposition is really serious about swallowing Pasir Ris-Punggol GRC and show Big Nose the door, they need to either send in a stronger team or offer some assistance to the SDA.

Counter the spread of misinformation
Over the past couple of weeks, the notorious PAP Internet Brigades (IBs) have stepped up their intensity to spread FUDs about the opposition and various falsehoods. Their #PAPsmear tactics now extend to using fake accounts and fake stories to run down opposition parties. 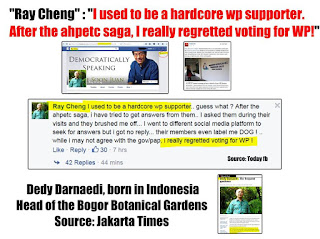 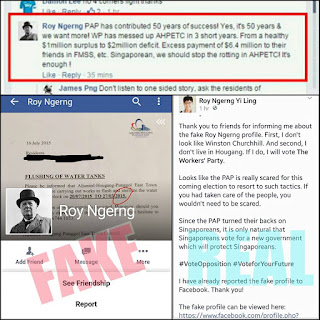 Left unchecked, these could have an equally damaging effect as the daily propaganda dished out by the compliant media. The opposition needs to invest resources to counter the spread of misinformation online because this is the space that they at least have a level playing field.

Don’t get me wrong. I like the IBs. Sometimes when I need to take my IQ down a couple of notches or when I need a reality check on the dismal state of humanity, they can be very “entertaining”. But at the end of the day, nothing can be worse than another five years of greed and cronyism. So vote wisely! If you want to continue to give the #PartyAgainstPeople a blank cheque to govern, then you truly deserve the royal screwing you get.

Good post. I think there is another possibility for AMK GRC. On nomination day, the opposition party that wants to contest there will be disqualified based on some technicalities – maybe Ravi's mental health? maybe Law Society will do something? or PAP will use the court case with Roy to say he's not eligible to contest. So in the end, there will be a walkover for AMK and the PM is safely returned to parliament. Possible?

Josh, with the PartyAgainstPeople, they will do anything and say anything to stay in power so anything is possible.

Well I just came across this: https://www.reddit.com/r/singapore/comments/3ikk6o/hypothetically_speaking_what_would_happen_if_the/

Seems like the PAP have a lot of options to deal with the unlikely scenario that PM Lee gets voted out.